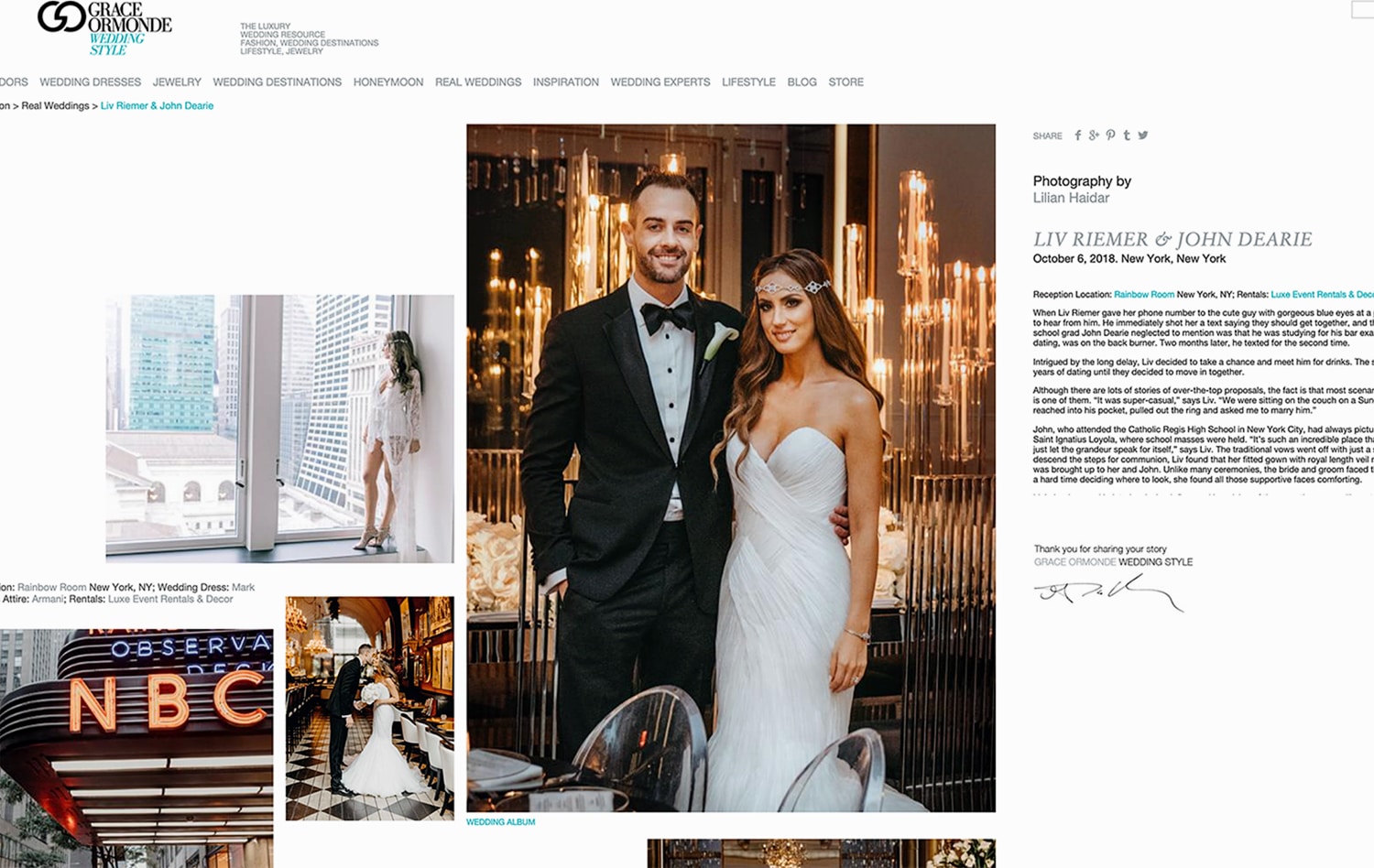 A chic and modern New York City wedding, I photographed at the Rainbow Room and the Baccarat hotel In New York City, featured on Grace Ormonde wedding style blog ! .

When Liv Riemer gave her phone number to the cute guy with gorgeous blue eyes at a party in the Hamptons, she expected to hear from him. He immediately shot her a text saying they should get together, and then he disappeared. What recent law school grad John Dearie neglected to mention was that he was studying for his bar exam and everything else, including dating, was on the back burner. Two months later, he texted for the second time.

Intrigued by the long delay, Liv decided to take a chance and meet him for drinks. The successful evening kicked off several years of dating until they decided to move in together.

Although there are lots of stories of over-the-top proposals, the fact is that most scenarios are rather down-to-earth, and this is one of them. “It was super-casual,” says Liv. “We were sitting on the couch on a Sunday afternoon sipping wine when he reached into his pocket, pulled out the ring and asked me to marry him.”

John, who attended the Catholic Regis High School in New York City, had always pictured being married at the Church of Saint Ignatius Loyola, where school masses were held. “It’s such an incredible place that flowers would be lost there, so we just let the grandeur speak for itself,” says Liv. The traditional vows went off with just a slight hitch. When it was time to descend the steps for communion, Liv found that her fitted gown with royal length veil made that impossible. Instead, the rite was brought up to her and John. Unlike many ceremonies, the bride and groom faced the congregation, and although Liv had a hard time deciding where to look, she found all those supportive faces comforting.

Liv’s background in interior design influenced her vision of the reception venue. “I wanted modern and chic and candles everywhere,” she says, but nothing was speaking to her. Meanwhile, John loved the iconic Rainbow Room at the top of Rockefeller Center in New York, so she decided to make the room her own. With a landmark designation, any changes to the Rainbow Room needed approval. Covering the wooden dance floor with an acrylic white one – a must for Liv’s vision – proved to be challenging, but not insurmountable for this determined bride.

While descending a curved stairwell for their first dance as newlyweds, John was floored by what Liv had created. Details enhancing the splendor of the Rainbow Room included 400 cylinder candles, pinspots lighting mirrored or black tablecloth-covered tables, ghost chairs, sparkling chrome and mirrored elements “making it truly spectacular,” says John.

Dancing to the music of Madonna, Pat Benatar and other ’80s icons kept the crowd energized and on their feet, while speeches from family members during dinner added emotional weight to the evening. “I felt the love all around us and could not believe that John and I were about to embark on a future together,” says Liv.

Late in the night, after a wardrobe change to a sparkly beaded short dress, Liv and John joined friends for an afterparty at Bar 65 across the hall from the Rainbow Room, where they celebrated into the new day. The room was decorated for the occasion with a Miami vibe including pink lighting, palm trees and “cheesy, fun props,” while a DJ provided hip hop and techno dance tunes.

Because of Liv’s work teaching architectural drawing and design, the honeymoon waited six weeks for Thanksgiving break, when they headed for St. Lucia and Martinique for snorkeling, mud baths, touring and relaxing on the beach.

On their return, with Liv experiencing wedding planning withdrawal, the couple took on a new project as Liv fell in love with another pair of blue eyes – Skye, a miniature Australian Shepherd puppy. “She’s my dream dog and we are both obsessed with her,” says Liv.